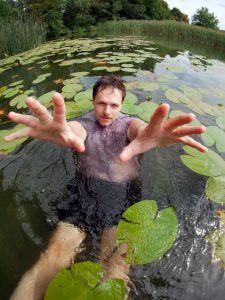 On Bells encompasses a variety of styles and sounds shifting from ethereal lo-fi soul and synthpop to indie-techno-esque compositions and modern beatmaking. His electronic sounds, versatile vocals and guitar playing build the base for his songs, the feelings oscillate between romantic, dark and euphoric. Born in a small village in Austria he taught himself a way into recording and producing. After studying fine arts in Spain he relocated to Vienna, Austria and he is currently a member of the painting class of Daniel Richter at the Academy of Fine Arts Vienna.
Jakob Kolb, AKA On Bells, performed in various locations, for example in clubs in Barcelona and Vienna, on the A38 ship venue in Budapest, MOT Club London, at art galleries, the Red Bar at Volkstheater and at the Waves Festival 2019. His singles airplayed in radio stations all over Europe.
After the previous released singles “Wild Love” (together with musician Titus Probst) and “Vibes in the shower”, which score Place 1 and 2 in the FM4 Charts, in Autumn 2021 his Debutalbum “Drip” got released digitally and later on Vinyl, followed by a new Single “Deep Clean” in 2022 and new EP to be out in 2023.